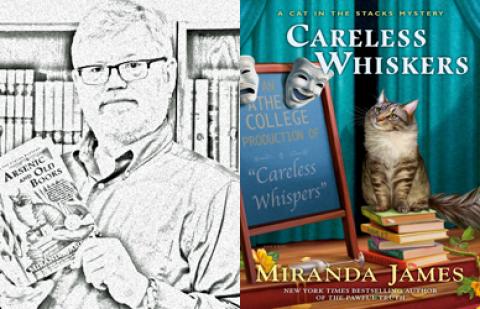 When librarian Charlie Harris’ daughter is falsely accused of murder, he and his faithful feline Diesel must leap forward to crack the case in this all-new installment in the New York Times bestselling series.

Charlie Harris has sworn off investigating murder and mayhem after a recent close call. Instead, he’s delighted to cheer on his daughter, Laura, who’s starring in a production of Careless Whispers. The theater department at Athena College is debuting the play written by a fledgling playwright with local connections and Charlie’s son-in-law, Frank Salisbury, will be calling the directorial shots.

Laura is upset to learn that Luke Lombardi, an overbearing actor she knew from her time in Hollywood will also be taking part in the production as a guest artist. Lombardi arrives with an entourage in tow and promptly proceeds to annoy everyone involved with the production. When he collapses and dies on stage, after drinking from a glass Laura handed him, she becomes the chief suspect in his murder.

Charlie knows his daughter is innocent, and  he’s not going to let anyone railroad his little girl. So,  despite his intentions to put his amateur sleuthing days behind him, Charlie has to take center stage, and with Diesel’s help, shine a  spotlight on the real killer.

If you would like to reserve a copy ($26), and we do not have your information on file, you may send it to our easy, secure and encrypted web form by Clicking Here